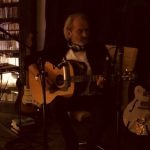 Jack fronted Wang Chung for five albums in the ’80s, left the limelight to produce, and got a jazz combo going by 2000 which he’s released five albums with, reformed Wang Chung, and only now is having a debut solo release, the double album Primitif.

We discuss “Whitstable Beach” from that album, “Class War and Sex War” by Jack Hues and the Quartet from A Thesis on the Ballad (2015), and “Brahms Blues” by The-Quartet from Illuminated. (2006) We conclude by listening to “To Live and Die in L.A.” by Wang Chung from Ochesography (2019).