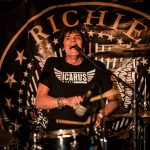 Richie Reinhardt drummed for The Ramones for three albums and has released two solo albums and some singles. We discuss his new single “Not Afraid,” his 2013 solo version of “I Know Better Now” from Entitled (2013), “Human Kind” by Ramones from Too Tough to Die (1984), and “I Fix This” from Cellophane (2016). Intro: “Somebody Put Something in My Drink” by Ramones from Animal Boy (1986). End song: “The Last Time” (a 2018 single). For more see richieramone.com.