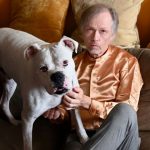 Dennis fronted the Baltimore punk band Ebenezer and The Bludgeons in the late 70s, and after some transitional projects moved to L.A. where his ’60s-ish guitar pop band The Jigsaw Seen released nine albums from 1989-2015.

Sponsor: Visit nebia.com/nem and use code NEM for 15% off your shower upgrade.