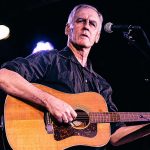 Robert co-fronted the Australian-born post-punk band The Go-Betweens through nine albums in the ’80s and ’00s with Grant McLennan before the latter’s death in 2006 and has also released seven solo albums.