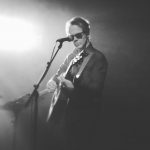 Peter started The Apartments in Australia in the late ’70s and has been its only consistent member. After releasing his first full album in 1985 and being featured on a John Hughes soundtrack, he released four lush, moody albums in the ’90s but then retired when family tragedy struck until the late ’00s; he’s had four releases since 2011.