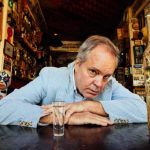 We discuss two tracks from The Unfortunate Demise of Marlowe Billings (2018): “A Killer Now” and “Sky Harbor,” plus “La Passionaria” from Can o’ Worms (1995). We conclude by listening to “Who Knows” by The Slummers from Love of the Amateur (2010). Intro/outro: “Sixteen Ways” by Green on Red from Gas, Food, Lodging (1985). More at marlowebillings.com.