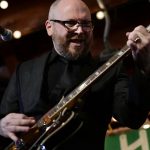 Josh released three albums and some EPs in the 90s with his brothers as the Chicago-area punk band Smoking Popes, then became a Christian and released an album and a half as Duvall, then reformed the Smoking Popes to release three more albums since 2008. He’s also released some religious material as a solo artist, and his new album is composed of live covers of classic songs and reworkings of his own material.

We discuss “Need You Around,” originally from Born to Quit (1995) and re-arranged for The Hideout Sessions (2021). We then turn to the Popes’ “Amanda My Love” from Into the Agony (2018) and Duvall’s “Taking Me Home” from Volume & Density (2003), and we conclude with another new recording, “My Funny Valentine” (Rodgers/Hart). Intro: “Megan” from Destination Failure (1997). More at smokingpopesmusic.com.

Sponsors: Visit HelloFresh.com/examined14 and use code examined14 for up to 14 free meals with free shipping. Get 15% off an annual membership at MasterClass.com/examined.