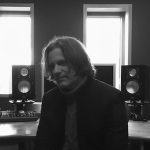 Guy has been a highly sought-after British producer/keyboardist since the early ’90s and is just now releasing his debut album, Stet. We discuss “Mono No Aware” and “Dorian” from that album and “Unravel” from Björk’s Homogenic (1997). End song: “Let’s Go” by Frou Frou from Details (2002). Intro: “Crazy,” co-written with Seal from his debut album (1991).