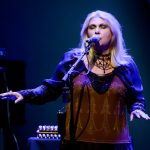 We discuss “Blessing in Disguise,” the title track from her 1994 album; “Grandine il Vento”, the title track from Renaissance’s 2013 album, and “Precious One” from Annie’s The Dawn of Ananda (2000). End song: “Symphony of Light,” also from Grandine il Vento.
Opening music: “Introlise” from Annie in Wonderland (1977) and Renaissance’s “Northern Lights” from A Song for All Seasons (1978). More at anniehaslam.com.