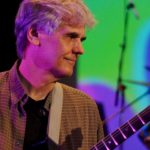 Steve is best known as guitarist/arranger for Oingo Boingo through their eight albums from 1981-1995 and for following its leader Danny Elfman into a life creating movie soundtracks. However, his activity as composer goes all the way back to the late ’60s.

We discuss “Tango” by jackiO from their self-titled album (2019), “The Wake” and “Checking Out/Streets of Managu” from his soundtracks to Guilty as Charged (1991) and The Art of Travel (2008), and “Rainy Day Mushroom Pillow” by Strawberry Alarm Clock from Incense and Peppermints (1967). Outro: “Nothing to Feel” by Fejj from Alive (1979) Intro: the title track to Dead Man’s Party by Oingo Boingo (1985).