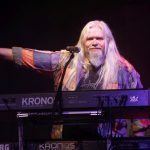 Clive is a keyboardist, orchestrator, singer, and composer of three musicals and several concept albums as a solo artist or collaborator. He’s played with Pendragon since 1986 and has led the bands Shadowlands and Arena since the 90s.

We discuss “Dragon Fire” from his most recent solo album, Song of the Wildlands (2021), “Silent Words” from his musical King’s Ransom (2017), and “The Tinder Box” by Arena from The Seventh Degree of Separation (2011). We conclude by listening to “A Descent into Madness” by Clive Nolan and Oliver Wakeman from Dark Fables (2021). Intro: “The Key” by Strangers on a Train from The Key Part 1: Prophecy (1990). More at clivenolan.net.