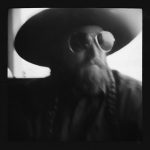 Roderick Wolgamott Romero founded and fronted the Seattle 90s space rock band Sky Cries Mary. So how does a poet get a band? Is a poet’s process different from a typical lyricist’s?

We also listen to “You Are” from Sky Cries Mary’s final studio album, Small Town (2007), and the opening/closing music is “Walla Walla” from A Return to the Inner Experience (1993).

Hear more conversation with and four more songs by signing up for a recurring donation, then clicking here.