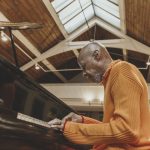 Jazz multi-instrumentalist Edward Larry Gordon Jr. became Laraaji around the same time he started releasing meditative zither music in the late 70s and was then discovered by Brian Eno, who produced our intro, “The Dance No. 1” from  Ambient 3: Day of Radiance (1980). Laraaji has since had around 40 releases of largely improvised music.