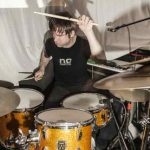 John founded the Brooklyn space-rock cooperative Oneida in the mid 90s and has put out 13 albums with them plus four as his solo project Man Forever and several others as collaborations or as Kid Millions.

We discuss two tracks by Man Forever from Play What They Want (2017): “You Were Never Here” and “Twin Torches” (feat. Laurie Anderson), then Oneida’s “All in Due Time” from Romance (2018), and listen  to “Nine Years of Facing a Wall” by Fox Millions Duo from Biting Through (2019). Intro: “Sheets of Easter” by Oneida from Each One Teach One (2002). For more, see johnwilliamcolpitts.com.