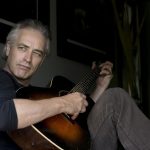 Wesley started performing as John Wesley Harding in the late ’80s (often eliciting comparisons in his early work to Elvis Costello), moved from England to the U.S. in 1991, and has 20+ releases, switching to his own name in 2013 as a result of his success as a novelist.