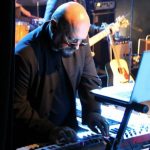 Phil is the long-time string arranger for Tori Amos and has done a heap more production, arrangement, and keyboard work. He has a very deliberate production style, carefully crafting a very natural-sounding theatrical background using both cutting-edge and very old tools.

We talk about “Cross the Channel” from the Brik & Shenale EP (2012), Phil’s arrangement and production of “Stars that Speak” by Willie Deville from Pistola (2008), and “Pornokiss” from a project Phil initiated called The Royal Macadamians from their album Experiments in Terror (1990).

We also listen to a brand-new Shenale instrumental “Gautama in Love.” The opening music is from “Yes, Anastasia” by Tori Amos from Under the Pink (1994). Learn more about Phil at johnphilipshenale.com.

Hear more conversation with Phil and three more songs by signing up for a recurring donation.