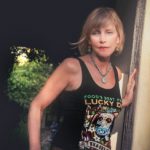 Jill was part of a 3-woman vocal band in the ’80s called The Life is Grand Band, and then in 1995 released Songs About Sex & Depression, and only in 2015 unveiled her long-awaited study of the dark psychology of fairy tales, A Handmade Life.