After joining Jellyfish in 1993 just before its demise, Eric’s big break came when he was asked to sing for Slash’s Snakepit. He then returned to Roger Manning from Jellyfish for an album as Imperial Drag, worked as sideman (e.g. for Alice Cooper) and studio guy and had two releases as Sextus. He’s now back with Roger in The Lickerish Quartet, which released two EPs. 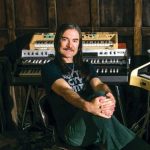 Roger rose to fame as keyboardist/songwriter for Jellyfish in the early ’90s, then formed Imperial Drag, The Moog Cookbook, TV Eyes, backed Beck, and finally released two albums under his own name starting in 2006. He’s recently released a solo EP and one with The Likerish Quartet that reunites him with some other members of Jellyfish.