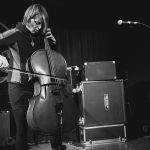 Alison was studying classical music when she joined Jason Narducy in 1994 in a duet that grew into two Verbow albums. She’s since recorded four solo cello albums and been a guest musician on over 100 albums, playing with Bob Mould, Superchunk, Anthrax, Broken Social Scene, etc.

We discuss “Become Zero” and “Vanished Star” from Become Zero (2016), then “Beautiful Friends” from Arriving Angels (2013) and listen to “For My Father” by Jarboe/Helen Money (2015). Intro: “New History” by Verbow from White Out (2000); closing music from “Political Song for Michael Jackson to Sing” from In Tune (2009). For more, see helenmoney.com.