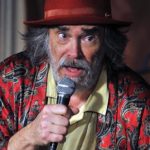 Chandler was a comedian in the ’70s, launched a rock group in the ’80s, and has released dozens of albums, fronting multiple bands at a time.

We discuss “The Strongman of North America” by The Chandler Travis Philharmonic from Waving Kissyhead Vol. 2 & 1 (2017), “The Crutch of Music” by the Catbirds from Catbirds Say Yeah (2012), and “Fluffy” by the Philharmonic from Llama Rhymes (2003). We conclude by listening to another Kissyhead track, “By the Way.” Opening music: “Long As You Have Somebody Else” by The Incredible Casuals from That’s That (1987). For more, see chandlertravis.com.