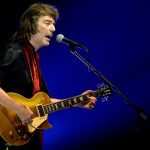 Steve released six studio albums with Genesis between 1971 and 1977 and twenty-five solo albums that feature his virtuosic guitar and the spirit of ’70s prog rock. He now works with producer/keyboardist Roger King to create dense, cinematic soundscapes.

We discuss “In the Skeleton Gallery” (and listen to “Anything but Love”) from The Night Siren (2017), “Love Song to a Vampire” from Wolflight (2014), and “Omega Metallicus” from Darktown (1999). Opening/closing music: Steve’s solo from “Firth of Fifth” from Genesis’s Selling England by the Pound (1973). More at hackettsongs.com.