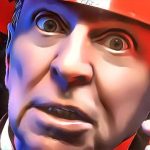 Jerry is DEVO’s co-frontman and chief philosopher. They’ve released nine albums since 1978. His solo career has been sporadic, with a release as Jihad Jerry & the Evildoers in 2006 and a few singles. We discuss his new song and video “I’m Gonna Pay U Back,” and one of those Jihad Jerry tracks (that album now reissued to include the new track) “The Owl,” and the 1979-recorded Devo track “Fountain of Filth” (released on Hardcore Devo Vol. 2). We conclude by listening to his 2016 single “It’s All Devo.” Intro: “Whip It” by Devo from Freedom of Choice (1980). For more see geraldvcasale.com.