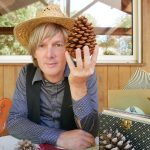 David has released 8 albums and some EPs as the London-based Comet Gain since 1994, putting out literate, energetic, sloppy rock, typically splitting the lead vocals with a female voice. As a pandemic project, he just released his first album under his own name.