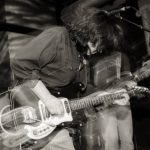 Most famous for her ’90s Boston grunge band Come, Thalia has since 2001 put out six albums and some EPs, with a stripped-down yet not acoustic sound that makes good use of her low, smoky voice and tasteful electric guitar, often accompanied by viola and/or piano with prominent drums.

We discuss “Northwest Branch” by The Thalia Zedek Band from Eve (2016); opening music is “Afloat,” also from that album. We then cover “Desanctified (Full Circle)” from Been Here and Gone (2001) and “Hell is in Hello” from Trust Not Those in Whom Without Some Touch of Madness (2004). End song: “Regatta” from the self-titled debut album (2016) by a collaboration called E.

Learn more at thaliazedek.bandcamp.com and Thalia’s Facebook page. Hear bonus audio for this episode by supporting NEM at patreon.com/nakedlyexaminedmusic or through a a PEL podcast network membership.