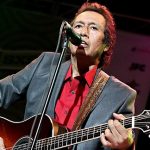 Alejandro started as a punk guitarist for the The Nuns, moved to Austin in the ’80s and became a songwriter with True Believers. He has since put out 14+ solo albums of story-driven, lyrically intense, stylistically varied Texas rock.