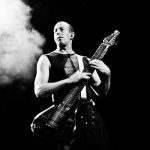 Trey is master of a many-stringed type of guitar that you play by tapping with both hands at the same time. His mentor was Robert Fripp, with whom he played in the seminal progressive rock band King Crimson. He has also released over a dozen exploratory solo albums. Learn more at treygunn.com.

We talked about “Kuma” from his solo album The Third Star (1996), “Level Five” from King Crimson’s The Power to Believe, and “God’s Monkey” from the David Sylvian/Robert Fripp album The First Day (1993).

We conclude by listening to Trey’s current touring group The Security Project, as they play the Peter Gabriel classic “No Self Control” from Live 1 (2016). Beginning and end music is from Trey’s Live and Hugo House EP (2015).

Hear more discussion and songs by signing up for a recurring donation, then clicking here.