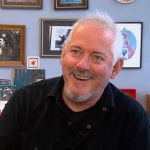 Jon has been a key member of art collective The Mekons since 1977, injecting country/folk/reggae/etc. influences into a seminal punk band to create an inimitable melange that has put out 19 albums, plus he puts out solo albums and is involved with many side projects including the country-punk Waco Brothers.

We discuss “Lil’ Ray O’ Light” from his solo album Here Be Monsters (2014) and two Mekons songs: “This Funeral Is for the Wrong Corpse” recorded in 1991 and released on I Have Been to Heaven and Back: Hen’s Teeth and Other Lost Fragments of Un-Popular Culture, Volume 1 in 1999, and “Cockermouth” from Natural (2007).

We conclude by listening to the title track from the 2016 Waco Brothers album Going Down in History. Intro/outro music is from “Mephis Egypt” from The Mekons Rock ‘n’ Roll (1989).