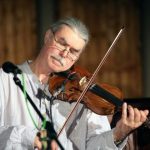 Peter’s violin was a key part of Steeleye Span’s updating of traditional folk songs from 1971–2013. His original songs were among the group’s most heartfelt. We talk about being creative with traditional music, authenticity, and finally getting the hang of songwriting late in his career.

We discuss “We Shall Wear Midnight” from Steeleye Span’s Wintersmith (2013 with Terry Pratchett), “Bows of London” from Gigspanner’s Layers of Ages (2015), and “From a Lullaby Kiss” (2014 solo). End song: “Who Told the Butcher” from Bedlam Born (2000 Steeleye); intro: “The Butterfly” from Lipreading the Poet (2008 Gigspanner).