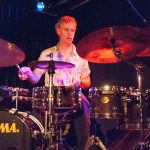 Bill was the original drummer for Yes, a default member of King Crimson, and briefly played with Genesis and the late ’70s supergroup U.K., but most of his output has been with his own jazz-inflected Earthworks and Bruford, as rock proved too confining for his rhythmic and tonal creativity.

We discuss King Crimson’s “One more Red Nightmare” from Red (1974), “Thistledown” from If Summer Had Its Ghosts by Bill Bruford, Eddie Gomez and Ralph Towner (1992), and “The 16 Kingdoms of the 5 Barbarians” from Every Step a Dance, Every Word a Song by Bill Bruford/Michiel Borstlap (2004). We also hear “Hell’s Bells” and the title track of One of a Kind by Bruford (1979), plus “Five Per Cent for Nothing” from Fragile (1972) by Yes.