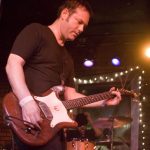 Frank has led punk band The Mr. T Experience in the Bay Area since 1985, and has also released three successful music-related books for teens since 2006.

We discuss “Down With the Universe” from King Dork Approximately (2016), “Big, Strange, Beautiful Hammer” from Yesterday Rules (2004), and “More Than Toast” from Our Bodies Our Selves (1993). We conclude by listening to “Even Hitler Had a Girlfriend,” a 2014 single by Dr. Frank & the Bye-Bye Blackbirds. Opening/closing music: “Danny Partridge” from Everybody’s Entitled to Their Own Opinion (1986). Learn more at frankportman.com.