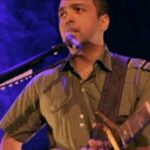 Asif led Canadian band MIR from 1998 to 2008, and has since recorded with real instruments for commercials and films, and released a one-man-band Police-influenced album Synesthesia in 2013.

We discuss the title track and “Electrical” from that album, also MIR’s “A Day in Your Life” from 7 Directions (2004). We conclude by listening to “The Chosen One” from MIR’s A Soldier’s Carol Christmas EP (2008). Intro music: “No Taxidermy,” produced for Empire Theaters.

Learn about Asif’s music at asifillyas.com and his studio at theshire.ca.