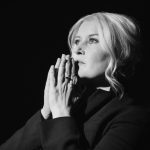 The Grammy winner and 90s hitmaker has released 10 studio albums since 1994 after backing Peter Gabriel on his Secret World tour in the early ’90s.