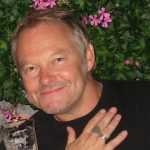 In 1986 Nick van Eede released a song (“I Just Died in Your Arms”) that will be played long after we are all dead. But he’s got a lot more going on than that, and on his new album (still under the moniker “Cutting Crew”) he’s recorded his best songs from the last decade without regard for continuity with the sound that made him famous.

We discuss “Reach for the Sky” from The Scattering (1989), “Berlin in Winter” from Add to Favourites, “Frigid as England” from Compus Mentus (1992), and wrap up by listening to “Looking for a Friend,” also from the new album. Learn more at cuttingcrew.biz.