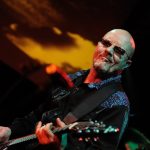 Britain’s Wishbone Ash started in 1969 and has released 25+ albums, with guitarist/singer Andy the sole member left from the original band.