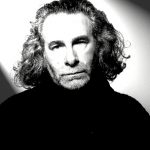 Kevin Godley is a multi-media master, having directed many of the coolest music videos you’ve ever seen. But before that, he was half of Godley & Creme and 1/4 of 10cc, singing, drumming, and mostly coming up with ideas, ideas, and more ideas. Today he runs Whole World Band, a platform for collaborative video creation, and recently released his iBook autobiography Spacecake, but he still performs on occasion, and for the first time produced some solo music as part of his soundtrack to the audioplay Hog Fever.