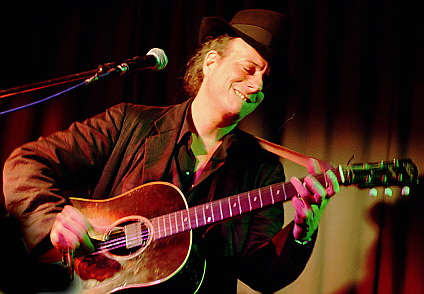 Gary is a guitar virtuoso who’s put out more than 30 albums, typically by writing guitar instrumentals that then get a melody and words added by a singer/songwriter, the most famous of these being Jeff Buckley

in the early ’90s, but also Joan Osborne

and many others. Gary got his start on Captain Beefheart’s final albums in the early ’80s, and gained from him an intuitive approach designed to be experimental yet deeply felt and accessible.

On this episode of the Nakedly Examined Music podcast, we discuss a new instrumental “Will O’ the Wisp” (singers are invited to layer on their own vocals; Mark’s version will appear at the end of Partially Examined Life episode 135), “Overture” from Stereopticon

So, why add vocals at all to self-contained instrumentals? How does the solitary Zen activity of oneness with your instrument relate to then sending it to someone else to add things to? Why didn’t Gary ever just join a famous touring band and cash in? We discuss these issues and others, and then listen to “The Kid” from Gary’s 2014 album with Peter Hammill, Other World

You can learn more about Gary from his recent book Touched By Grace: My time with Jeff Buckley

and by visiting his website: garylucas.com. You can see and hear more of his many and various projects on YouTube and SoundCloud.

Hear more conversation between Gary and Mark and more Gary songs by signing up for a recurring donation, then clicking here.

My pilot Song Self Exam video is up! Get involved, musicians! These are quick and easy to record, and we’ll post them all on our website and add them to a playlist on our YouTube channel.