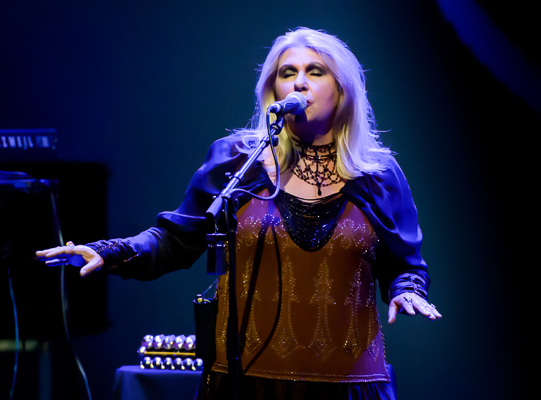 We discuss “Blessing in Disguise,” the title track from her 1994 solo album

with music by Michael Dunford, and “Precious One” from Annie’s The Dawn of Ananda

(2000), with music written by Michael Dunford, performed by Rave Tesar. End song: “Symphony of Light,” also from Grandine il Vento (the album was re-released as Symphony of Light in 2014).

Opening music: “Introlise” from Annie in Wonderland (1977) and Renaissance’s “Northern Lights” from A Song for All Seasons (1978).

Learn more (and see her paintings) at anniehaslam.com and renaissancetouring.com.

Here’s the current live version of Renaissance playing their longest song. Here’s the classic lineup live back in 1977. Here’s all of “Northern Lights.” While Grandine Il Vento, was only a reunion of Annie and Michael Dunford, an earlier aborted reunion involving four out of the five members of that lineup produced the Tuscany album in 2001; here’s a song from that. If you’re interested, listen to the original 1969 Yardbirds-lineup of Renaissance (which Annie was not involved with).

“She’s the Light” is one of the songs with music written by Larry Fast (Synergy, Peter Gabriel) for Annie’s 1989 self-titled album (which she calls “the Epic album”). Here’s another one from that album written by Justin Hayward of the Moody Blues. Here are a couple of songs from the album of live standards we talk about near the end, Some Enchanted Evening. Here she is talking more about voice care.

Annie has also sung with Steve Howe and Patrick Moraz from Yes, on this Genesis tribute album, and here’s her take on The Beatles’ “She’s Leaving Home,” also from that album.