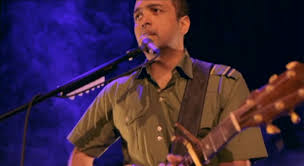 Asif led the highly textured Canadian pop band MIR from 1998 to 2008, and has since then recorded with real instruments for commercials and film soundtracks, and released a one-man-band album Synesthesia

in 2013, designed to sound like a missing link between the Police’s Synchronicity and Sting’s Dream of the Blue Turtles.

We discuss the title track and “Electrical” from that album, , discussing how you can be creative while not being afraid of displaying your influences. We also discuss MIR’s highly orchestrated “A Day in Your Life” from 7 Directions

(2004). We conclude by listening to “The Chosen One” from MIR’s A Soldier’s Carol Christmas EP (2008). Intro music: “No Taxidermy,” produced for Empire Theaters.

Learn about Asif’s music at asifillyas.com and his studio at theshire.ca.

Here he is looping himself at a live solo show, and then at the same show playing a Police tune. Here are the videos for “Synthesthesia” and “A Day in Your Life,” as well as “A Soldier’s Carol.” The song “What Goes Around Comes Around,” is from the OK2Go album that we talk about on the episode as sounding closer to Green Day. We also refer to the “MIR Supershow,” where they play with numerous guests and a full string section. It starts here.