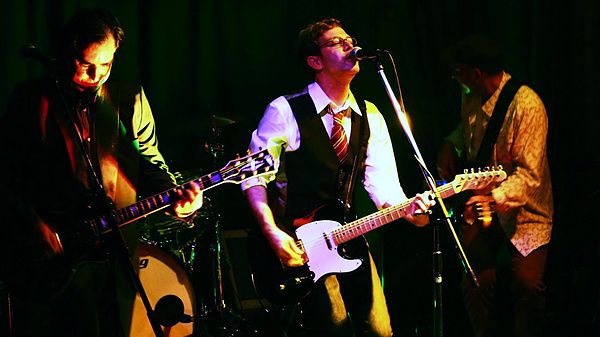 Bradley started as a drummer, graduated to front-guy, and in 2005 formed the Bay Area band, The Bye-Bye Blackbirds, which inhabits the niche of Byrds-influenced “power pop” even though Bradley really doesn’t like that term or its sometimes very shallow connotations.

(2013), and the opening/closing music is from “The Ghosts Are Alright” from House & Homes

Here they are playing “Elizabeth Park” live acoustically and “All in Light” live electrically. Here they are back in 2009 playing “The Ghosts Are Alright” electrically, and here’s a version with new drums where you can really hear the harmonies. The second vocalist in that line-up is William Duke, who recorded this Christmas song.

As far as the influences we discuss go, check out Big Star at their most joyful yet unhinged here. (Note that the band lives on post-mortem: here’s a sweet recent rendition of one of their slower/country things. And if you aren’t familiar with Gene Clark’s work post-Byrds, this is the album Bradley refers to. Bradley’s mentor was Scott Miller, who fronted Game Theory (see here) and and later The Loud Family (see here). Here are Scott and Bradley singing together.