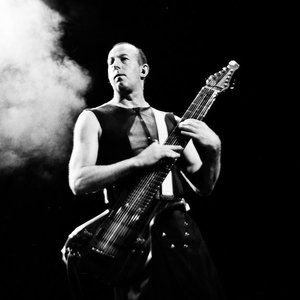 Trey is one of a small group of masters of a many-stringed type of guitar/bass that you play by tapping with both hands at the same time, sort of like a keyboard. His mentor was Robert Fripp, with whom he played in the ’90s and ’00s lineups of the seminal progressive rock band King Crimson. He has also released over a dozen exploratory solo albums and numerous collaborations that are more atmospheric and textured than most jazz but more improvisational and difficult than most rock.

We talked about “Kuma” from his solo album The Third Star

We conclude by listening to Trey’s current touring group The Security Project, as they play the Peter Gabriel classic “No Self Control” from Live 1

Hear more of the interview and more songs by signing up for a recurring donation, then clicking here.

Learn more at treygunn.com. Watch the Trey Gunn band play “Kuma” live on YouTube. Watch Trey demonstrate the Warr guitar and give a talk on originality from 2012. Watch him perform with KTU (featuring accordion!). Watch a live performance of King Crimson’s “Level Five” and also “Red” the track that we discuss originally from 1974. Also, Trey reinterprets the classic Crimson track “21st century Schizoid Man” for solo Warr guitar in a hotel room.