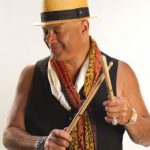 Narada started as a fusion drummer in the ’70s (with Mahavishnu Orchestra, Jeff Beck, etc.) then released numerous solo albums and produced and wrote for artists like Whitney Houston, Mariah Carey, Aretha Franklin, and many more. He believes in working fast: creating a mood and getting the most out of it.

We discuss “Freedom” (written by Richie Havens) from Evolution (2015), “I Shoulda Loved Ya” from The Dance of Life (1979), and the title track from Garden of Love Light (1976). We also listen to “Billionaire on Soul Street,” also from Evolution. The opening music is from “Freeway of Love” which Narada wrote and produced for Aretha Franklin, and the outro music is from “How Will I Know?” which Narada produced and wrote the verses to for Whitey Houston.