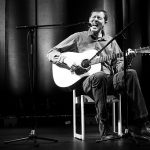 Robbie has recorded 12 solo albums of crafty-lyric, country-folk music since 1996, including the new, Grammy-nominated Upland Stories. We discuss “America is a Hard Religion” and “Fare Thee Well, Carolina Gals” from that album, then look back to “Where There’s a Road” from Georgia Hard (2005) and conclude with “I Told Her Lies” from South Mouth (1997). Opening/closing music: “Hamilton County Breakdown” a 1989 live recording released on The Very Best of Robbie Fulks. Learn more at robbiefulks.com.