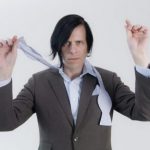 Since 1988, Ken has put out several sparkly/grungy albums with The Posies, more under his own name and in various collaborations, played in the revived version of Big Star and in the touring band for R.E.M., and much more. He’s a busy guy!

We close by listening to “Whatever Hell” by Holly and Ken from The Record (2015). Opening/closing music: “Solar Sister” by The Posies from Frosting on the Beater (1993).